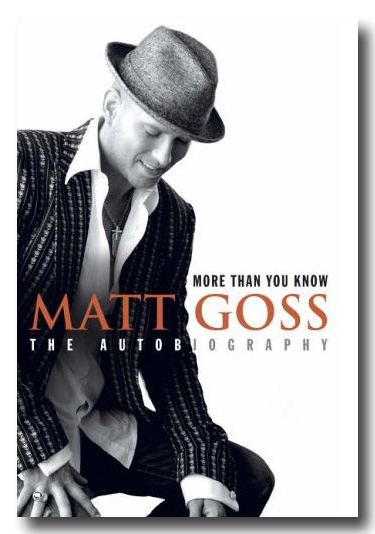 Matt Goss recounts his unbelievable life story in emotional detail. From financially deprived but emotionally rich beginnings, Matt sees his fortunes literally turned upside-down, with all the fame, glamour and money he could hope for violently snatched away from him. Matt Goss has been a staple part of British tabloid life for years – yet, the general public has had no idea of the astounding life that he has led – and still lives – behind the headlines and sound-bites. Here, for the first time, he takes them into his confidence and reveals the true extent of his own astounding tale. Matt was brought up in a proudly close but financially frustrated south London family with twin brother Luke and his mother. Fortunes changed rapidly for Matt when, alongside his brother Luke and school friend Craig, he created Bros – a band that sold sixteen million records in an intensely chaotic and record-breaking reign over the world’s pop charts. By the end of his teens, Matt could boast eleven Top 40 hits, number ones in nineteen countries, a Brit Award and the record for being the youngest band to headline Wembley Stadium. Bros became a by-word for mercurial celebrity extravagance, hysterical fan stories, financial scandal, personal tragedy, tortuous upset and glorious triumph. Yet after those bizarre and insane times, Matt’s life became even more tempestuous, crammed with inner fear, personal revelation and unforeseen challenges. He is now back with a vengeance after a spell on TV’s Hell’s Kitchen, finding a new audience through his acclaimed solo music career, which has already included chart-topping soundtracks and further Top 40 hits. Here he will finally tell the true story of his life, promising to reveal a litany of private torment, personal revelations and celebrity anecdotes. With the most up-to-date information available on going to press, this is the account of a man who can truly say that he has experienced the highest of highs and the lowest of lows, to have held the world in his hand and seen it snatched away from him in the blink of an eye, yet has the strength of character and personal insight to continue to claim to be ‘truly blessed’.

You can buy Matt’s autobiography from amazon HERE