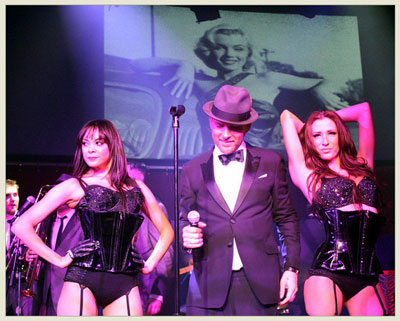 British singer-songwriter Matt Goss has a worldwide following, and fans from Europe, Australia and Canada who couldn’t get to his opening night in Caesars Palace over the weekend set off a viral tidal wave to be there online. Scary Spice Mel B, multiplatinum-recording artist Leona Lewis and singer Natasha Bedingfield, however, made it through the throngs for Matt’s premiere produced by Pussycat Dolls creator Robin Antin in the new Gossy Room at Cleopatra’s Barge in Caesars Palace. Stunning Playboy playmate Laura Croft also was there the first night, and on the second night, The Hills reality TV stars and real-life couple Audrina Patridge and singer Ryan Cabrera turned up, where fans trying to get in offered $100 tips to staff to find them a seat. He opened to the jam-packed room with Superstition and performed Frank Sinatra favorites, including Luck Be a Lady and I’ve Got the World on a String. The crowd erupted and sang along to the popular Hotel California and Lovely Las Vegas, an original score written as a love song to his new home on the Strip. I was amazed when I posted my first tweets because I had an almost instant response from Matt’s fans in Australia, Canada, London and elsewhere in Europe despite the time zone differences. They avalanched me with requests to keep tweeting during the show, and when I posted videos of Matt’s performance and my interview with him afterward, it was pure overload on my Twitter account. Within 20 minutes, the Australians said they were counting 10,000 followers Down Under through the entire concert, with even more fans joining from London and Canada. It’s incredible to watch his fan base following every note, and in the first hour of our early morning teaser posting with the simultaneous coverage on Matt’s Web sites, another 6,000 logged on!